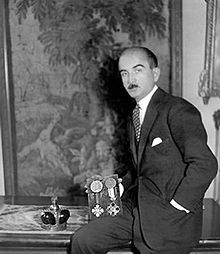 George Matchabeli was a Georgian nobleman, diplomat and an American perfumer. He was born in Tbilisi in July 1885 and is a descendant of the princely family of Machabeli, from the Tskhinvali area, currently known as the South Ossetian province of Georgia, today occupied by the Russian army. He studied in the Tbilisi College of Nobles and later in the Royal Academy at Berlin, where he was interested in mining engineering.  He was one of the founding members of the Committee of Independent Georgia organized in Berlin in 1914. The Committee intended to garner German support for Georgia’s struggle for independence from the Russian Empire. 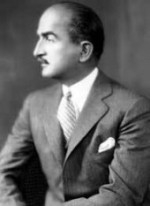 portrayal of the Madonna in Max Reinhardt’s unique 1911 pantomime spectacle play The Miracle. He briefly served as the Georgian ambassador to Italy until the establishment of Soviet rule in Georgia in 1921.  He and his wife then moved to the United States. Mr. Matchabeli wanted American citizenship, but wasn’t willing to relinquish the glamour of his title as Prince, so he petitioned for the right to use the title as his first name. So from 1934 onward, he was Mr. Prince Matchabeli. The prince was an amateur chemist who began creating perfumes for his friends and family as a hobby.  In 1924 he and his wife, now known as Princess Norina Matchabeli, established the Prince Matchabeli Perfume Company.  Norina designed the crown shaped perfume vial in the likeness of the Matchabeli crown.  His first employees were all fellow exiled aristocrats. One Georgian writer of the time remembered them as the most courteous staff in the United States and the prince himself was a perfect spokesman for his product. He had a reputation for exquisite manners and refined appearance, ideal for selling perfume to American women. In 1928, Matchabeli’s perfumes were awarded the Grand Prix with gold medal at the expositions in Paris and Liege for their quality and originality.

George Matchabeli was one of the founders of the Georgian Association in the United States and served as President of the association from 1932 until his passing in 1935.  He died in his home in New York and was buried in Mount Olivet Cemetery in Queens.