The Georgian Association in the United States of America expresses concern over recent developments in Georgia and a potential escalation of the internal political situation. We call on the Government of Georgia, on the leaders of the opposition and all Georgian citizens to refrain from further confrontation and find ways for political reconciliation.

Georgia is facing grave security challenges and a substantial economic crisis that requires mobilization of moral, political and economic resources of the entire nation. Georgia needs national political consensus to deal with these important issues. The Government and the opposition must make concessions and agree on terms of this consensus. Priorities are clear and shared by the majority of Georgias political forces. They include normal political processes that allow broad representation in the government, and a peaceful transition of power; promotion of an independent judiciary and the rule of law; free media; favorable business environment and guarantees of property rights.

We call on the United States Government to take a pro-active position and to urgently send a high level US Government official to Georgia to mediate between the Government and the opposition. The Georgian Association is willing to facilitate such mediation with all its available resources.

On behalf of the Board of Directors, 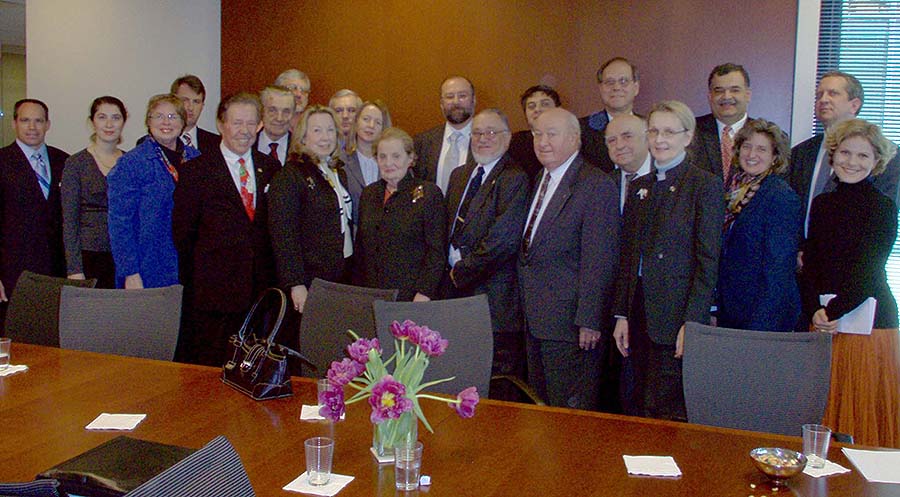 The meeting focused on key areas of concern for the Georgian Association, including Russia’s actions against Georgia and Ukraine and other Central and East European countries, energy security and diversification, and NATO enlargement. Secretary Albright fondly remembered her collaboration with General John Shalikashvili as she recalled her work on NATO enlargement. “NATO enlargement, the removal of the divide between East and West Europe, opened up a new chapter in the history of Europe. John and I stood side-by-side during this momentous time,” Albright noted.

Secretary Albright speaking on behalf of Senator Clinton reaffirmed Senator’s support for NATO’s “open door” policy. She welcomed Ukraine’s and Georgia’s aspirations for full NATO membership. Secretary Albright made it clear that the Membership Action Plan (MAP) criteria constitute a roadmap for full NATO membership, and MAP will be the measure determining the timeline of the actual membership in NATO for Ukraine and Georgia.

Albright expressed confidence that Senator Clinton would continue to advance issues of concern to the Georgian Association and the CEEC and she urged the group to remain engaged on the issues in Washington DC.