As part of its ongoing advocacy effort to raise the consciousness of issues important to Georgian Americans and their friends, on May 6, 2019, the President of the Georgian Association in the USA (GA), Elisabeth Kvitashvili, along with Board of Directors members, John Tsotne Dadiani, Veronika Metonidze, and Darina Markozashvili, met with Mr. Collin Davenport, Legislative Director, and Ms. Molly Cole, Legislative Assistant, of Representative Gerald Connolly’s office (U.S. House of Representatives, 11th District, Virginia). Rep. Connolly is the co-chair of the Congressional Georgia Caucus, along with Rep. Adam Kinzinger (U.S. House of Representatives, 16th District, Illinois). In January 2019, Rep. Connolly and Rep. Kinzinger introduced H.R. 598, also known as “Georgia Support Act,” in support of Georgia’s independence, sovereignty, and territorial integrity. The Georgian Association thanked Rep. Connolly’s office for his continuing strong support to Georgia. The GA pressed to have the HR passed in 2019 if possible. In addition, we welcomed Congressional support for maintenance of assistance levels to Georgia (both civilian and military) for FYs 2019 and ’20. The discussion primarily focused on the continuing creeping annexation of Georgian territories by Russia and Russia’s violation of Georgia’s territorial integrity and sovereignty. 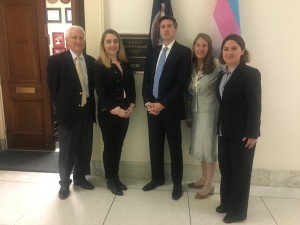 We followed the meeting on Capitol Hill with a May 8th meeting at the State Department.  President Elisabeth Kvitashvili was joined by Board Member Darina Markozashvili, and together they raised concerns with Ms. Alicia Allison, Director, Caucasus Affairs and Regional Conflicts, Bureau of European and Eurasian Affairs, Mr. Aaron Rupert, Senior Georgia Desk Officer, and Mr. Christopher Hallett, Georgia Desk Officer. Although the discussion focused on the strong U.S.- Georgia bilateral relations, the GA expressed dismay that Georgia is yet to have a confirmed US Ambassador at post. The Department is hopeful a name may be forthcoming in the near future. The Department reaffirmed its support for robust levels of U.S. assistance in support of Georgia’s economic and democratic development but noted disappointment with Georgia’s judiciary.  The Georgian Association updated State Department colleagues about the cultural and educational projects the Association is currently supporting.