News and Events
You are here: Home / News and Events / Announcement / Georgia’s contribution to the International Security Assistance Force i...

Georgians should be proud of the many contributions and tremendous sacrifices made in Afghanistan as part of the international war on terror.  Georgian troops arrived in Afghanistan in 2004. Georgia became the largest non-NATO and the largest per capita troop contributor to the International Security Assistance Force (ISAF) in Afghanistan by late 2012.  At its peak deployment, Georgia provided two full infantry battalions serving with United States forces in Helmand province, primarily a United States Marine Corps (USMC) area.  Since the beginning of their mission, more than 11,000 Georgian soldiers have served in Afghanistan.  In June 2016, Georgia still had 861 troops, the largest non-NATO contributor to the Resolute Support Mission follow-on to ISAF, second only to the United States.

While the Georgian combat mission in Helmand ended in July 2014, Georgia pledged troops to the new NATO-led non-combat, training, advisory, and assistance mission called “Resolute Support” launched in January, 2015.  At various times, Georgia has also deployed an infantry company serving with the French contingent in Kabul, medical personnel within the former Lithuanian Provincial Reconstruction Team and some individual staff officers.

Georgia’s commitment to supporting international forces has come at a price.  Since 2010, 31 Georgian servicemen have died, all in the Helmand campaign, and over 400 wounded, including 35 amputees.  Many of the amputees received medical treatment in the United States, mostly at Walter Reed National Military Medical Center (WRNMMC) in Bethesda, MD.  Some soldiers with severe burns and traumatic brain injuries were treated at other specialized military medical centers.  The amputees included single, double, and triple loss of limbs.  At WRNMMC, they received excellent care including state-of-the-art prosthetics and rehabilitation.  Some of the wounded warriors had their families residing with them during their stay in Bethesda, and two of the amputee families gave birth to children who will have dual citizenship. 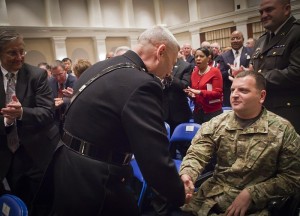 Gen. John M. Paxton, Jr., assistant commandant of the Marine Corps, left, thanks LTC Alex Tugushi, a battalion commander with the Georgia forces stationed with the Marines in Helmand Province, Afghanistan and wounded warrior, right, for his attendance and sacrifice during a promotion and appointment ceremony at Marine Barracks Washington, D.C., Dec. 15, 2012.

During their rehabilitation, some lasting several years, the soldiers were often visited by Georgians living in the Washington, D.C. area, as well as Americans who learned of their sacrifices.  At the recommendation of the Georgian Embassy, the Wounded Warrior Mentor Program (WWMP) started an English as a Second Language program to help the wounded soldiers benefit from their time in the lengthy treatment and healing involved in amputations.  The WWMP, with a dedicated group of volunteers and six Georgian wounded with their relatives who act as Non-Medical Assistants (NMA) and two Georgian medical personnel, met weekly at Bethesda to study English as a second language, and also to socialize, watch sports and share food; Georgian food of course.

One of the most severely wounded was LTC Alex Tugushi, a highly decorated battalion commander of the Georgian forces.  LTC Tugushi, served two eight month tours in Iraq, and two in Afghanistan, the second cut short by his wounds from a roadside bomb. While recuperating at WRNMMC he was visited by many USMC officers and President Barack Obama.  LTC Tugushi has since been promoted to full Colonel and lives in Georgia. By 2015, all the soldiers at WRNMMC had returned to Georgia to regain their lives with family and friends.

United States Secretary of Defense Leon E. Panetta visited the Georgian 31st Battalion in March 2012.   “I wanted to come here and thank you for your sacrifices,” the secretary said.  The secretary read a letter he said Tugushi had given him for the battalion. Dated March 12, the letter read, in part: “It has been an honor to serve with you. You are Georgian heroes. … The Armed Forces of Georgia, serving together with international forces in Afghanistan, are making a large contribution……”  “It is a great honor to serve shoulder to shoulder with the United States in one of the most troubled regions of Afghanistan,” the letter continued.

“Unfortunately, I could not complete my service with you. But I am proud of all of you — those who have fallen and those who continue to serve. You are all heroes who will go down in Georgian history.”

When the secretary finished reading Tugushi’s letter, he said it expressed his own feelings about the accomplishments of Georgian troops over the past eight years as part of the 50-nation coalition.

“You are an example of that international partnership, fighting for stability in Afghanistan,” Panetta said.

Georgia, a small country that more than lived up to its commitment to the international community has yet to be accorded a Membership Action Plan which would pave the way for Georgia to become a member of NATO.