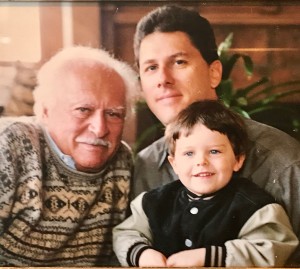 Born November 1, 1919 in Tbilisi, Georgia. Guivy Zaldastani was a Boston businessman who often played the role of diplomat between his adopted country and his native country of Georgia. At 84 he returned to his homeland and lived in Tblilisi to the great age of 87 passing away on October 12, 2007.

When Mr. Zaldastani introduced himself at gatherings, it would often surface during the course of a conversation that he was from Georgia. “Not that Georgia, of course,” he would quickly add in his rich, Eastern European accent, referring to the Southern US state. “I am from the Georgian Republic in the Caucasus. “For Georgian émigrés in Boston, Mr. Zaldastani was the meet-and-greeter who kept his door open to any and all who hailed from his homeland.

Mr. Zaldastani’s family fled Georgia when he was 5, but he returned to the hilly city of Tbilisi on the banks of the Mtkvari River in 2004, living not far from the American Academy he helped found. When his family left Georgia to steer clear of the impact of the communist takeover, they took up residence in Paris, living with other Georgians who left for similar reasons. He fought with French marines in World War II and earned a law degree from the Sorbonne in Paris in 1945.Three years later he moved to the United States, earning a Master’s of business administration from Harvard Business School in 1951. He became a US citizen shortly thereafter.

Mr. Zaldastani worked his way up in the management chain at Filene’s before starting his own chain of stores. As president and chief executive officer of The Finishing Touch, a bed-and-bath retail chain found in malls around Boston, Mr. Zaldastani traveled the world to purchase items to sell. He later branched into real estate, heading up the international division of a Boston-based real estate firm, and did consulting work for his brother’s engineering firm, Zaldastani Associates Inc.

When the Soviet Union started to collapse in the late 1980s, culminating in its dissolution in 1991, “He was over there on the next jet,” said his son, Nicholas of San Francisco. In visits to his homeland, Mr. Zaldastani was eager to have a hand in helping the nation develop and believed education was key. First, he helped several young Georgians to continue their education with scholarships at Harvard Business School.  Later, he worked with others to form the American Academy in Tbilisi, a school aimed at helping Georgian students get a solid academic foundation, and then attend US colleges so they could bring back ideas of democratization. Mr. Zaldastani was behind the successful efforts of the Georgian Association in the USA to obtain a grant from the US government to cover costs associated with training for the teachers at the Academy at Harvard and Boston University. The school opened in 2001, and school officials say it has become one of the toughest schools to get into in Georgia.  Today the Guivy Zaldastani American Academy in Tbilisi is the top private high school in Georgia, and graduates of the Academy are earning thousands of dollars in scholarships at top US schools every year.