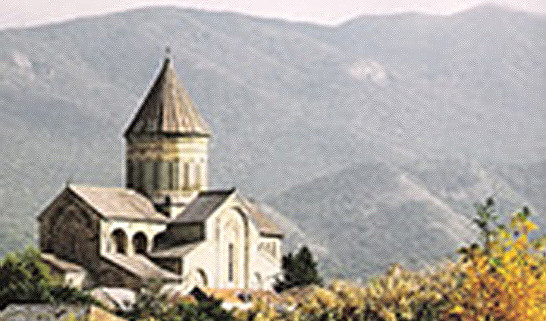 Entitled “The Lives of the Georgian Saints”, the book encompasses seventeen hundred years of Orthodox Christianity in Georgia. For more information and to order a copy of the book, please visit this site: http://www.sainthermanpress.com/catalog/chapter_five/
Lives_of_the_georgian_saints.htm

Washington, DC. The Georgian Association in the USA was dismayed by some of the provisions of the recent UN resolution on Georgia. On October 13th, 2006, the UN Security Council unanimously passed Resolution 1716 which prolongs the mandate of UNOMIG (the United Nations Organization Mission in Georgia) in the Abkhazian region of Georgia. UNOMIG was set up in August 1993 following an agreement to end the armed secessionist conflict in Abkhazia and currently has 121 military observers and 12 civilian police officers in place, as well as nearly 300 civilian staff members.

The Georgian Association objects not to the extension of UNOMIG’s mission, which the Georgian government and the majority of the Georgian people support, but to the distorted information contained in the resolution. Furthermore, the US government’s participation in the drafting of the resolution suggests to us and the rest of the world that the US administration has shifted its policy towards tolerance for Russia’s de facto annexation of Georgian territory.

This resolution is a step backwards and a disappointment to the Georgian people who have come to expect US government support for its attempt to protect Georgia’s sovereign rights and its citizens in the territory of Abkhazia. This resolution comes at a time when the Russian government is persecuting Georgian citizens and Russian citizens of Georgian origin in Russian cities following the Georgian government’s arrest – and later return – of Russian spies this October. This anti-Georgian campaign orchestrated by the Russian government has led to the closure of Georgian businesses in Russia, the illegal and often forced entry into Georgian homes by Russian officials, pressure on the Russian Ministry of Education to supply information on Georgian pupils, and the forced deportation of Georgians. It is a dangerous policy of cleansing that reflects the anti-democratic and authoritarian policies of the Russian government. US support of UNSC resolution 1716 condones Russian de facto annexations abroad and ignores Russian discriminatory policies at home.

At the reception, the Georgian Association honored Senator Richard Lugar (R – Indiana, Committee on Foreign Relations) for his continued support of issues important to the Country and people of Georgia. Following brief remarks by Mamuka Tsereteli, President of the Association, the Senator was presented a Georgian icon of Saint George. The icon, set in walnut wood, represents historical religious traditions, and modern artistry.

(Click here for Senator Richard G. Lugar’s Address at the 75th Anniversary of the Georgian Association)

The House passed a similar version of the bill on March 6; a technical difference must be resolved between the bills before it can become law.

“The goal of this bill is to reaffirm United States support for continued enlargement of NATO to democracies that are able and willing to meet the responsibilities of membership. In particular, the legislation calls for the timely admission of Albania, Croatia, Georgia, Macedonia, and Ukraine to NATO and authorizes security assistance for these countries in Fiscal Year 2008. Each of these countries has clearly stated its desire to join NATO and is working hard to meet the specified requirements for membership,” Lugar said.

“I believe that eventual NATO membership for these five countries would be a success for Europe, NATO, and the United States by continuing to extend the zone of peace and security. Albania, Croatia, and Macedonia have been making progress on reforms through their participation in the NATO Membership Action Plan since 2002. Unfortunately, Georgia and Ukraine have not yet been granted a Membership Action Plan but nevertheless have made remarkable progress. This legislation will provide important incentives and assistance to the countries to continue the implementation of democratic, defense, and economic reforms.

“Since the end of the Cold War, NATO has been evolving to meet the new security needs of the 21st century. In this era, the threats to NATO members are transnational and far from its geographic borders. There is strong support among members for NATO’s operation in Afghanistan, and for its training mission in Iraq. NATO’s viability as an effective defense and security alliance depends on flexible, creative leadership, as well as the willingness of members to improve capabilities and address common threats,” Lugar said.

Historical Dictionary of Georgia by scholar Alexander Mikaberidze will be released in the United States on March 28, 2007. To our knowledge, it will be the first publication of its kind in English language. To order a copy of the book please follow this link – www.scarecrowpress.com/ISBN/0810855801